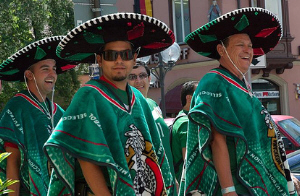 Whom did Jerry Jones book to headline the inaugural sporting event at Cowboys Stadium? Mexico, which set a soccer attendance record in Texas in its 2009 Gold Cup quarterfinal against Haiti. And guess who kicked off the first full event at New Meadowlands Stadium the following year? Mexico again, in a friendly against Ecuador that was attended by 77,705 fans, according to ESPN. END_OF_DOCUMENT_TOKEN_TO_BE_REPLACED