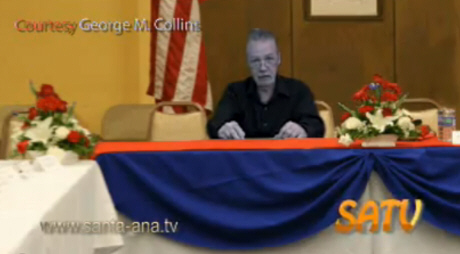 Santa Ana Mayoral candidate George Collins tried to participate in the South Santa Ana Merchants’ Association candidates forum this week, but they would not let him video tape the proceedings. This happened to Collins two years ago as well, when he also ran for Mayor.

Why this organization won’t allow their forums to be recorded on video is a real mystery.

Collins responded to the snub by recording the video above.

Rumor has it that none of the challengers will end up getting more then ten percent of the vote and most of them are stuck at three to four percent, according to recent polls.

That said, Collins may play an important role in this election by undermining Hart’s campaign.