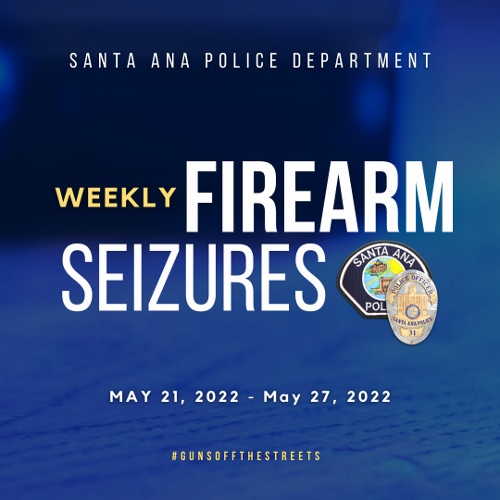 The SAPD announced their gun seizures for the week of May 21.

SAPD gang detectives attempted to make contact with three subjects when one of them fled on foot. The suspect was detained a short distance away by Civic Center Patrol Officers.

The SAPD detectives searched the suspect’s path of travel and located a loaded. 22 caliber semi-automatic pistol near dumpster.

The SAPD detectives also learned that all three suspects were active Santa Ana gangbangers and they were all then arrested on felony charges.

SAPD Directed Patrol Officers conducted a patrol check where they encountered a subject inside an occupied vehicle. The officers identified the subject as a person wanted for assault with a deadly weapon involving a firearm.

The officers detained the subject without incident.

During a search of his vehicle the officers also located a loaded .40 caliber Smith and Wesson semi-automatic firearm, misc. ammo and a large quantity of narcotics.

During the arrests they recovered the firearms and narcotics pictured.