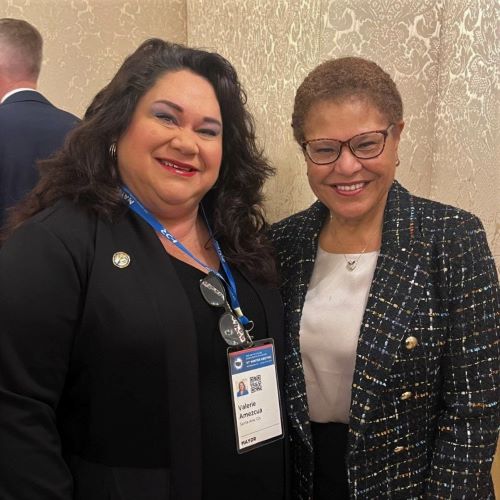 Mayor Amezcua released the following statement regarding her trip:

“As Santa Ana’s mayor, I’m doing everything in my power to help our city secure critical federal and state funding to improve infrastructure, ensure safe neighborhoods, build necessary housing, and protect our air and water quality. I’m encouraged by the conversations that I had and the meetings I attended this week. I’m confident that we can improve and protect our city’s quality of life by working closely with our federal and state partners.”

Valerie Amezcua was elected in 2022 as the first woman mayor in Santa Ana’s history. She previously served for eight years on the Santa Ana Unified School District Board.

Professionally, Valerie had a 30-year career with the Orange County Probation Department. She retired in 2017 as a Supervising Probation Officer. Her long record of community involvement includes having served on the Board of Directors for the National Hispanic Business Women’s Association, and on both the City of Santa Ana’s Human Relations Commission and Early Prevention & Intervention Commission.