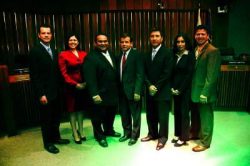 I heard today from a Santa Ana City Hall insider (yes one of my pajaritos) that the Santa Ana City Council is seriously looking at changing our City Council elections to a Ward-Specific model. Currently we elect our Council Members at large – but they have to live in a specific Ward (unless they move of course).

I would personally welcome Ward Specific elections but my tipster said that it will be very difficult to arrange equal wards – given that some wards are denser than others. That aside the other problem would be that changing our election laws would give each of our City Council members a fresh set of years – in effect nullifying their current term limits. That is no bueno! These Council Members have been on the Council for some ten years now and our City is worse than ever because of their efforts.

Crime has shot way up under their watch – and now the City is tittering on the edge of financial ruin because of their ill-advised Sanctuary City ordinance.

Be careful when the wolves ask the sheep for anything! This City Council majority simply cannot be trusted.

4 thoughts on “Is the Santa Ana City Council going to push for ward-specific elections and full time pay?”