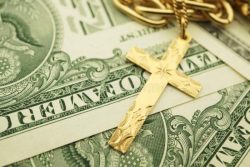 It is one of the dichotomies of conservative Christian Orange County. There are churches all over the place but they minister, for the most part, to the well-off and mostly ignore the downtrodden.

There are, to be fair, still a few churches and local religious organizations that do feed the homeless and provide assistance, such as the OC Rescue Mission and the O.C. Catholic Worker. But imagine if every church in Orange County took in 3-5 homeless people? We could get them all off the streets!

Remember also that churches take up a lot of land in our County and they avoid paying most taxes.

Could our churches do more to help with the homeless problem? Could they be part of the solution? Will churchgoers ever truly embrace what Jesus bade them to do? His positions were after all more like those of Bernie Sanders than Donald Trump. Jesus was essentially a socialist.

One thing for sure. Local churches will be packed this Easter Sunday. And the homeless crisis will continue to be a major problem here in Santa Ana and just about all over Southern California.