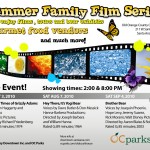 Our state flag has a bear on it, but we don’t see bears in Orange County much anymore.  However, on August 7, the Old Orange County Courthouse, in conjunction with Downtown, Inc., is presenting the second of three films about, you guessed it, bears, as part of their 2010 Summer Family Film Series.