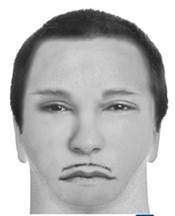 The victim was travelling northbound on the Interstate 5 freeway when he observed red and blue flashing lights behind his vehicle. The victim exited the freeway and yielded in the Jack-in-the-Box parking lot located at 2938 S. El Camino Real. Immediately after yielding, the victim was contacted by the suspect who was extremely aggressive and ordered him out of the vehicle and to sit on the curb. While the victim was sitting on the curb, the suspect stole a wallet, cell phone and keys from inside the vehicle.

The suspect was described as a male, Hispanic, 25-35 years old, having medium length hair and a thin mustache. He was dressed in “SWAT type” clothing; a black long-sleeved shirt and pants with no visible patches, markings or insignias. The victim described the suspect’s vehicle as a Ford Crown Victoria, similar to an unmarked police vehicle; however, a witness described the vehicle as an Infinity G35 or G37 with police-type lights on the dashboard. There was a second suspect seen in or near the suspect vehicle but the victim was unable to provide a description.

« Groundbreaking for new SAUSD Sports Complex set for 8/18
SAUSD Board V.P. Hernandez endorses Rodriguez for the School Board »