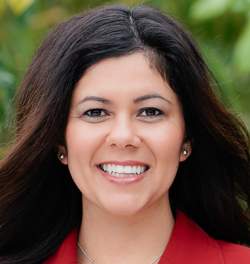 This week, Councilwoman Michele Martinez was in Sacramento at the League of California Cities’ first policy committee meetings of 2016. Martinez serves on the Transportation, Communication and Public Works Committee which is integral to the League’s policy-making process. She also serves on the League’s Board of Directors and the Orange County Division Board.

“The League’s policy committees enable us to weigh in on issues that will affect our budgets and shape future policies from the perspective of local government. Without these meetings our influence on the state’s decisions would be greatly diminished,” said Martinez.

“The City of Santa Ana is thankful for the League’s leadership on many key issues, such as active transportation, funding for our deteriorating streets, homelessness, and affordable housing. I look forward to working closely with the City of Santa Ana legislative team and the Chair of our Legislative Council Committee, Mayor Pro Tem Sarmiento, to help develop effective policies that meet the challenges of today and tomorrow,” Martinez further stated.

“These meetings provide an opportunity for city officials to learn about statewide proposals affecting California cities and have their voices heard by the League and translated into direct advocacy efforts,” said League Executive Director Chris McKenzie.

There are eight standing League policy committees including Administrative Services, Community Services, Employee Relations, Environmental Quality, Housing, Community and Economic Development, Public Safety, Revenue and Taxation, and Transportation, Communications, and Public Works. These committees evaluate proposed legislation as it related to existing policy and make recommendations for legislation where the League currently does not have policy.

The League’s policy-making process allows the issues facing California cities to be debated and the organization’s policy directions to be established. Close to 400 city officials serve on the League’s policy committees and add their collective expertise, wisdom and opinions to the policy debate that is the foundation of League policy. The recommendations from the policy committee are forwarded to the League board of directors.

Following the January meetings in Sacramento, the League’s policy committees will meet April 7-8 in San Diego, June 2-3 in Sacramento and in October during the League’s annual conference in Long Beach as needed.

Established in 1898, the League of California Cities is a nonprofit statewide association that advocates for cities with the state and federal governments and provides education and training services to elected and appointed city officials.