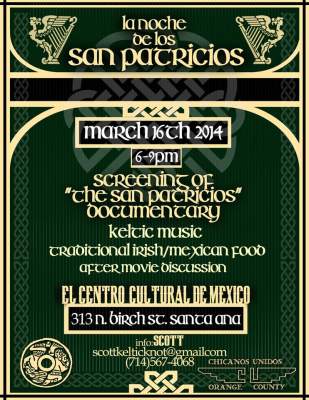 The Saint Patrick’s Battalion (Spanish: Batallón de San Patricio), formed and led by Jon Riley, was a unit of 175 to several hundred immigrants (accounts vary) and expatriates of European descent who fought as part of the Mexican Army against the United States in theMexican–American War of 1846-8. Most of the battalion’s members had deserted or defected from the United States Army.

Comprised primarily of Catholic Irish and German immigrants, the battalion also included Canadians, English, French, Italians, Poles,Scots, Spaniards, Swiss, and Mexican people, most of whom were members of the Catholic Church.[1] Disenfranchised Americans were in the ranks, including escaped slaves from the Southern United States.[2] The Mexican government offered incentives to foreigners who would enlist in its army: granting them citizenship, paying higher wages than the U.S. Army and the offer of generous land grants. Only a few members of the Saint Patrick’s Battalion were actual U.S. citizens. (Wikipedia)

They will also have a kids’ space with cultural coloring activities and a kids’ film “The Secret of the Kells.” The event is free.