Notice: Undefined variable: remote_version in /home/newsantaana/public_html/wp-content/themes/ifeaturepro5/functions.php on line 417
 New Santa Ana | The SAPD has arrested the woman suspected of flipping out at a McDonald’s
Santa Ana's top news & views blog 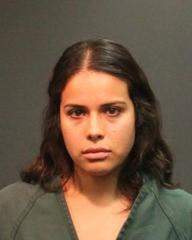 After doing the story with numerous media outlets, Detectives received numerous tips leading them to the identity and location of the suspect wanted in this assault. Based on the information provided Detectives were able to obtain a $15,000 arrest warrant for suspect, Mayra Berenice Gallo (24) of Santa Ana.

On 11-27-2018, Detectives arrested suspect Gallo at her residence without incident. She was booked into the SAPD Jail on the Assault Warrant.

« The O.C. Superior Court stopped the drug needle giveaway in Orange County
The SAPD is looking for a suspect who sexually assaulted a child at Cabrillo Park »