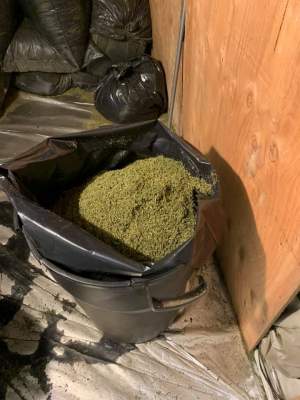 Due to the potential volatile/flammable nature of these labs the RNSP Lab Team, OC Bomb Squad, OC Health Hazmat and OCFA Hazmat Team assisted with the investigation and dismantling of the lab.

Several subjects have been detained and Code Enforcement has red tagged the building.

The investigation is still ongoing.

Hash oil, also known as honey oil or cannabis oil, is an oleoresin obtained by the extraction of cannabis or hashish. It is a cannabis concentrate containing many of its resins and terpenes – in particular, tetrahydrocannabinol (THC), cannabidiol (CBD), and other cannabinoids. There are various extraction methods, most involving a solvent, such as butane or ethanol. Hash oil is usually consumed by smoking, vaporizing or eating. Hash oil may be sold in cartridges used with pen vaporizers. Preparations of hash oil may be solid or colloidal depending on both production method and temperature and are usually identified by their appearance or characteristics. Color most commonly ranges from transparent golden or light brown, to tan or black. Cannabis retailers in California have reported about 40% of their sales are from cannabis oils. (Source: Wikipedia)