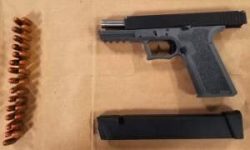 Two male subjects ran holding their waist area and they attempted to hide near a stairwell.

A semi-auto handgun with a loaded extended 30 round magazine was located in a nearby planter.

Both subjects were on probation and are documented gang members. They were both arrested for several felony charges.

The SAPD did not disclose where the arrest happened and they did not identify the suspects.

« A man was found shot to death in his vehicle near the Flower St. Park tennis courts
An inmate from Orange died at the O.C. jail on Sunday »