The Santa Ana City Council, at their meeting last night, considered a proposal by Mayor Miguel Pulido to vie a 5% pay increase to experienced SAPD police officers who have been with the SAPD for more than 15 years. (Agenda item 85A).

Morale has been a real problem at the SAPD, due to their low staffing numbers and a lack of leadership from their inexperienced Police Chief, Carlos Rojas, as crime has spiraled out of control in our city. I would imagine that Pulido’s proposal is meant to keep our veteran police officers as many of them have been leaving the city for other police agencies – something that NEVER happened under former SAPD Police Chief Paul Walters. 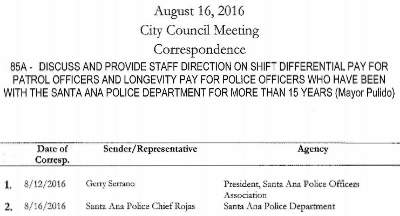 During the Council’s discussion about the pay raise proposal, Council Member Sal Tinajero mentioned that he was contacted by several local business owners saying they recently received an email from the President of the Santa Ana Police Officers Association (SAPOA) stating “crime is at an unprecedented raise in our city” and it’s all due to the lack of leadership with our City Council, Mayor, City Manager and Chief of Police. Apparently the SAPOA email included crime rates in Santa Ana that have skyrocketed including an increase in shootings in our city. 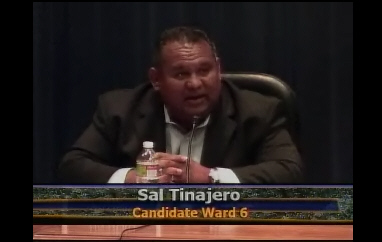 Anyone checking the crime incidents www.CrimeMapping.com would easily find that there are hundreds of crime incidents logged in our city and there have been multiple shootings in Santa Ana that happen on a weekly basis.

This is the number incidents in Santa Ana reported on CrimeMapping in just the last 3 days: 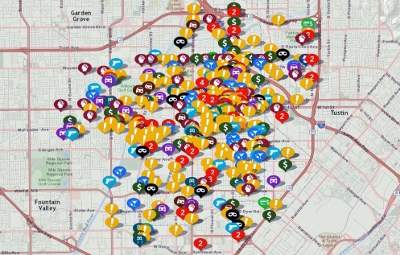 It would be great if Tinajero would state where he got his information on the number of shootings in Santa Ana so far this year, and explain how there has been a half a shooting.

Remember that our City Council members have placed a measure on the November ballot, Measure PP, that will give them a 700% raise – and they are quibbling about giving our veteran police officers a 5% raise?

« The ribbon-cutting at NOVA Academy Early College High School’s new Santa Ana campus is set for 8/22
A homeless woman was killed by a hit and run driver this morning on S. Bristol St. »