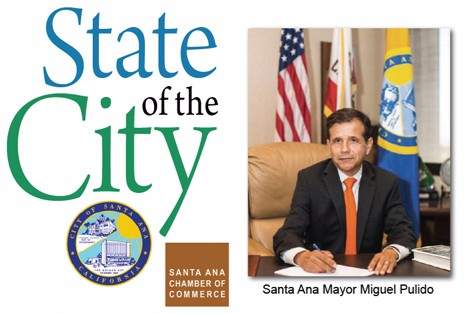 This event will feature Santa Ana Mayor Miguel Pulido, who will talk about how Santa Ana is doing. He usually joins his sons and his dad in performing a few traditional Mexican folks songs as well. END_OF_DOCUMENT_TOKEN_TO_BE_REPLACED

The room we were in was packed, which is always the case at these events. We were served a bizarre Americanized version of chilaquiles which was heaped on a slice of sauteed ham and included corn tortilla chips (with no chili seasoning), scrambled eggs, shredded Monterey jack cheese and cilantro. No salsa was served. There were also mini muffins, cream cheese and what looked like raspberry jam. END_OF_DOCUMENT_TOKEN_TO_BE_REPLACED 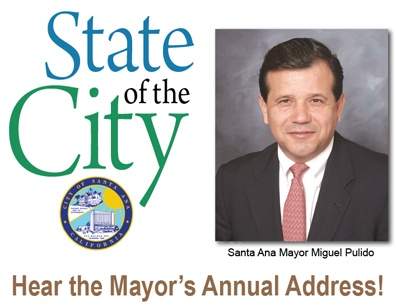 This event will feature, as is customary, keynote speaker Mayor Miguel Pulido. END_OF_DOCUMENT_TOKEN_TO_BE_REPLACED 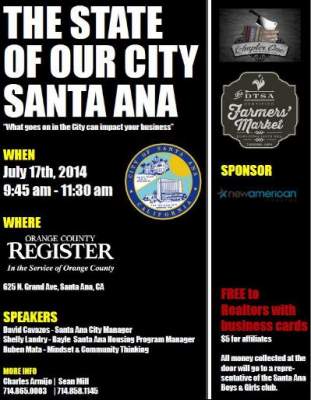 A “State of the City” presentation for Realtors, local business owners and residents is set for July 17, 2014, at 9:45am at the Orange County Register, located at 625 N. Grand Ave., in Santa Ana.

Realtors can get in for free with a business card.  The cost for others is only $5.  All money collected at the door will be donated to the Santa Ana Boys and Girls Club. END_OF_DOCUMENT_TOKEN_TO_BE_REPLACED 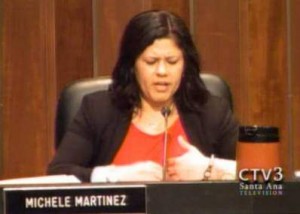 Santa Ana Councilwoman Michele Martinez is hosting her own State of the City address on Wednesday, August 28, 2013, at 6 pm, at the Santa Ana Senior Center, located at 424 West 3rd St., in Santa Ana.

Please RSVP to Martinez’ assistant, Gail Woods, at gwoods5@santa-ana.org or at 714-647-5200. END_OF_DOCUMENT_TOKEN_TO_BE_REPLACED

Mayor Miguel Pulido will deliver his 2013 State of the City address on Wednesday, June 19, 2013, to the members of the Santa Ana Chamber of Commerce.

Pulido was challenged last year by Councilman David Benavides.  Pulido beat him soundly just as he defeated criminal defense attorney Alfredo Amezcua in 2010.  Pulido has been our Mayor since 1994. END_OF_DOCUMENT_TOKEN_TO_BE_REPLACED 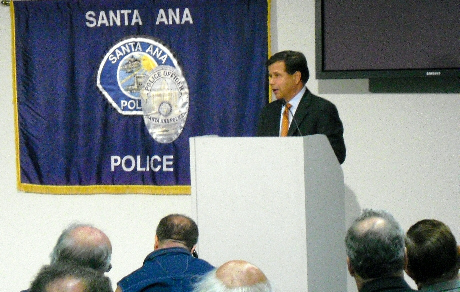 The Santa Ana Chamber of Commerce presents this special address by the city’s chief executive to hundreds of business leaders. Community-minded businesspersons have a chance to show their civic pride and support for the city by attending the State of the City event. Each year, Mayor Pulido shares up-to-the-minute news and anecdotes outlining the civic progress made during the past twelve months, as well as future goals and projects. END_OF_DOCUMENT_TOKEN_TO_BE_REPLACED 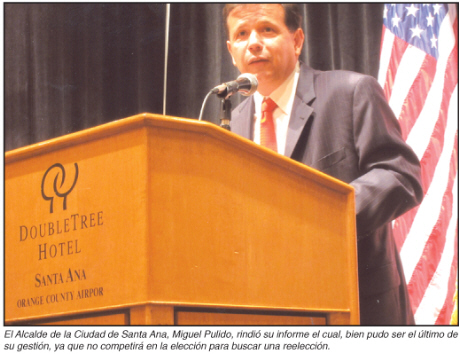 An article in the latest edition of Miniondas, a Spanish language newspaper in Santa Ana, covered Santa Ana Mayor Miguel Pulido’s recent State of the City Speech to the Santa Ana Chamber of Commerce.

The article stated that this is Pulido’s last run for Mayor.  It was a bit vague and could be interpreted to mean that he is not running this November, but I think that Pulido’s intention is for this to be his final term as Mayor.

In his speech Pulido mentioned his support for the Dream Act, which offers a path to citizenship for students who are undocumented.

Pulido also talked about a November ballot measure which will prevent the state from raiding city redevelopment funds.

He also complained about the recent flawed O.C. Grand Jury report, which sought to cast aspersions on the Transit Zone development.  A spurned ex-city commissioner was on that Grand Jury, tainting the results of their investigation.

The article also stated that Pulido has some critics who are angry that he has been in power for over 20 years.  His opponent, Al Amezcua, was noted, as were some of Amezcua’s supporters, including Dr. Art Lomeli and Sam Romero.  Neither of them live in Santa Ana although both operate businesses in downtown Santa Ana.

Pulido closed by saying that Santa Ana is headed in the right direction, with regard to education and our economy. 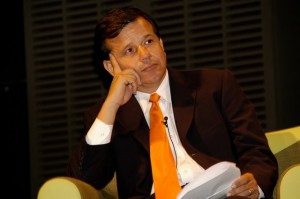 Santa Ana Mayor Miguel Pulido’s State of the City address will be held on Thursday, June 3, at noon, at the Doubletree Hotel , located at 201 E. MacArthur, in Santa Ana.