Synopsis: On 6/29/2017 at approximately 2:50 a.m., a masked suspect entered the Shell gas station located at 710 East Dyer Road; he approached the front counter of the business while brandishing a handgun located in the front waistband area of his pants. The suspect demanded money from the cash register; the store employee complied and gave him an undisclosed amount of money. In the video and pictures provided you can see the suspects face was momentarily exposed as he is approaching the cash register. Suspect fled the store on foot and there was no vehicle observed. END_OF_DOCUMENT_TOKEN_TO_BE_REPLACED 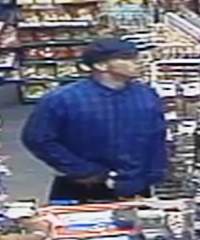 Synopsis: On 05/27/2015 at about 11:12 PM, the photographed suspects entered the business (Shell Gas station). Suspect #1 demanded the money from the cash register while showing the clerk a handgun in his waistband. The second suspect enters the store and acts as a lookout, unknown if he was also armed. After the store clerk gave Suspect #1 all the money in the register, both suspects exited the business and were last seen running south on Bristol Street. END_OF_DOCUMENT_TOKEN_TO_BE_REPLACED