Santa Ana, CA: At a hearing on May 23, 2019 in Orange County Superior Court, Judge David Hoffer ruled in favor of Orange County School of the Arts (OCSA), and granted a preliminary injunction against the Santa Ana Unified School District (SAUSD). The injunction replaces the temporary restraining order granted in the same court on May 9.

In March, SAUSD sent an invoice demanding payment of $19,493,329 for what it characterized as OCSA’s failure to contribute “an `equitable share’ for district-wide special education costs” (under the Special Education Local Plan Areas or “SELPA”) over a 17-year period. If payment was not made by May 15, 2019, SAUSD threatened to immediately withhold monthly state funding of $500,000 on an ongoing basis.

With today’s ruling, the court extended the restraining order, which will protect OCSA’s state funding until a permanent resolution is reached. This decision directs the district to honor the language in the current SAUSD board-approved charter.

“I hope this preliminary injunction sends a clear message to SAUSD that it is time to re-think its current position and agree to a resolution that is reasonable and fair to all parties,” stated Ralph Opacic, Ed.D., OCSA’s founder and executive director. 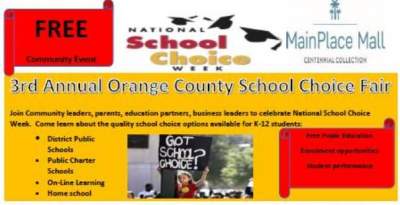 Recalling the status quo in education

By ORANGE COUNTY REGISTER EDITORIAL BOARD

Teachers, administrators and parents were naturally upset when they took to the lectern at the Santa Ana Unified School District board meeting last Tuesday to address the issuing of pink slips to 287 employees.

Most of those pink slips went to educators, and a number of teachers who received the notices, or knew a teacher who received a notice, spoke of the good work they and their fellow educators are doing, and how harmful the cuts would be to their schools. But, somehow, the only board member who voted against issuing the pink slips also seemed to be receiving most of the blame. END_OF_DOCUMENT_TOKEN_TO_BE_REPLACED

The news from the Santa Ana Unified School District board meeting should raise red flags for anyone with children in the district’s struggling school system. The board voted, 4-1, to hand out pink slips — i.e., layoff notices — to 287 teachers and other educators. The dissenting board member raised real fears of kids being herded into larger classrooms.

The notices are a state requirement. If there’s any possibility the district will lay off teachers this year, it must notify them now. There’s a good chance a smaller number — or none at all — will get the boot. Nevertheless, the vote says a lot about the way public-school systems are designed and about the priorities of the unions that help elect board members. END_OF_DOCUMENT_TOKEN_TO_BE_REPLACED 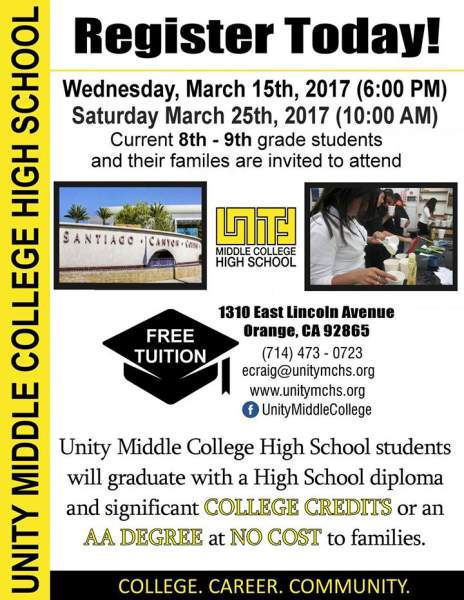 Unity Middle College High School will open in the Fall of 2017 at 1310 East Lincoln Ave., in Orange, with 100 9th and 10th grade students. They  are offering free college courses for all their students. Unity Middle College High School students will graduate with a High School diploma and college courses that may include an AA degree. They are currently accepting intent to enroll forms online. END_OF_DOCUMENT_TOKEN_TO_BE_REPLACED

Santa Ana – Parents, students, teachers, Orange County Supervisor Andrew Do and the greater Santa Ana community will come together Friday, Oct. 14, 2016 in a ribbon-cutting ceremony for the new Magnolia Science Academy (MSA) Santa Ana campus—a state-of-the-art facility funded by $17.4 million from the State of California. About 645 students have enrolled in the first K-12 STEAM-focused public school in Santa Ana—115 students more than original expectations—and there is also a waiting list. The Santa Ana campus is one of the 10 schools in the high-performing Magnolia Public Schools network in Southern California. END_OF_DOCUMENT_TOKEN_TO_BE_REPLACED

La Escuela Freire Academy for Culture, Leadership, and Civic Engagement hopes to work with Santa Ana Unified School District officials to plan the school, which intends to employ mostly current SAUSD employees. LEF’s board is composed of leaders and educators from Chapman and other Southern California universities. END_OF_DOCUMENT_TOKEN_TO_BE_REPLACED

A new charter school, Unity Middle College High School, is set to open this Fall. Spaces are filling fast! They only have room for 100 9th grade students.

The address is 671 North Poplar Street, in Orange. If you are interested, please pick up your enrollment packet at their mobile office at their site. They are open Monday – Friday from 9 am – 4 pm. Click here for more info.

Erin Craig, Ed.D. is their Founding Executive Director. She has over 12 years of experience in charter teaching, leading, and operating schools. She is the founder of E=MC2 Consulting, LLC. She specializes in K-12 charter schools, instructional leadership, middle and early colleges, innovative school reform, blended learning, and dual enrollment. Dr. Craig has redesigned the developmental math department at Golden West College and instructs a doctoral-level K-12 school finance course at USC’s Rossier School of Education. END_OF_DOCUMENT_TOKEN_TO_BE_REPLACED

Kirstie Suarez’s family moved several times when she was in high school, bouncing between California, North Carolina and Florida before Suarez took her final classes at Saddleback High School in Santa Ana.

Somewhere along the way, she fell two classes short of graduating.

Five years later, Suarez has made up that ground, and rather quickly, thanks to the College and Career Preparatory Academy, a brand new charter school approved by the Orange County Board of Education to assist young adults in need of a diploma or a path to higher learning. END_OF_DOCUMENT_TOKEN_TO_BE_REPLACED

I really dislike South Coast Plaza. Who can afford what the stores there have to offer?  But the MainPlace Mall is just the ticket with a decent array of stores and anchors and a great food selection that now includes wood-fired pizza at Blaze Pizza and bbq ribs at the new Lucille’s.  There is ample parking and two frozen yogurt places – plus my eye doctor. The previous owners of the MainPlace Mall, Westfield, just sold the shopping center to a group of developers. I hope they don’t mess it up! END_OF_DOCUMENT_TOKEN_TO_BE_REPLACED 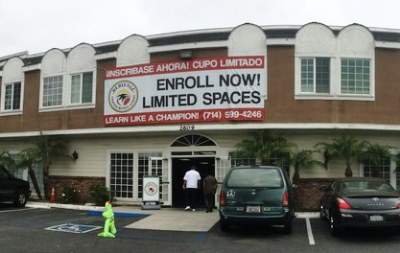 The event will mark the opening of the new middle school in Santa Ana and the first charter middle school in the history of Santa Ana. The ceremony will feature remarks by Orange County Board of Education President Robert Hammond, Vista Charter Public Schools staff—Vahe Markarian, Lauri Martin and Eduardo Rodriguez, and other guest speakers. Join us for the ribbon cutting ceremony. Tours of the school will follow the ceremony at 10:30 am. END_OF_DOCUMENT_TOKEN_TO_BE_REPLACED 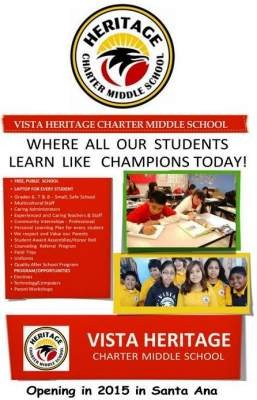 The Orange County Board of Education recently approved a petition to open a new charter school in Santa Ana, called the Vista Heritage Charter Middle School (VHCMS ). The details are pending negotiations with the OCBE but this looks like a done deal, according to the O.C. Register.

The board’s decision came after a petition from VHCMS was turned down by the Santa Ana Unified School District on a 4-1 vote in November. The O.C. board members overturned that decision by a 5-0 vote.

The OCBE is comprised of five Republicans.  The SAUSD School Board has two Republicans but only one of them, Ceci Iglesias, supports charter schools.