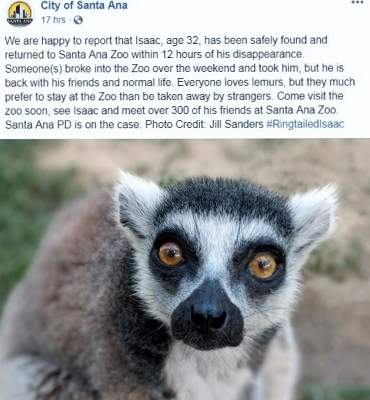 SANTA ANA, California – An Orange County man was sentenced today to three months in federal prison for breaking into the Santa Ana Zoo after hours and stealing North America’s oldest ring-tailed lemur in captivity to keep the endangered animal as his pet.

Aquinas Kasbar, 19, of Newport Beach, was given the 90-day prison sentence by United States District Judge Andrew J. Guilford, who also ordered him to pay $8,486 in restitution to the zoo.

Kasbar pleaded guilty on July 8 to one misdemeanor count of unlawfully taking an endangered species. He broke into the Santa Ana Zoo on July 27, 2018 after it had closed for the day. He then used bolt cutters to cut a hole in the zoo’s enclosures for lemurs and capuchin monkeys, which enabled several of the animals to escape, though they were later recovered.

While inside the zoo, Kasbar stole Isaac, a 32-year-old, ring-tailed lemur (lemur catta) and the oldest such lemur in captivity in North America. (Isaac turned 33 years old in July; a lemur’s lifespan typically is between 20 years and 25 years.) The ring-tailed lemur is native to Madagascar and is on a list of the 25 most endangered primates, according to court documents. Ring-tailed lemurs are endangered, in part, because of the illegal pet trade, court papers state.

Kasbar then placed Isaac in a plastic drawer that lacked ventilation holes, court papers state. The next day, Kasbar abandoned the animal in front of a Newport Beach hotel, leaving him in the same plastic drawer with two notes placed on it, which read, “Lemur (with tracker)” and “This belongs to the Santa Ana Zoo it was taken last night please bring it to police,” according to court documents. Kasbar’s actions resulted in a loss to the Santa Ana Zoo of approximately $8,486. Isaac later was returned unharmed to the zoo.

This matter was prosecuted by Assistant United States Attorneys Daniel H. Ahn of the Santa Ana Branch Office and Erik M. Silber of the Environmental and Community Safety Crimes Section.