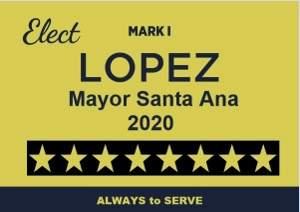 Born at the old Santa Ana hospital on Washington Street. Son of ‘Eddie and Isabel Lopez, longtime Santa Ana residents who worked hard to instill pride in self, and traditional family values. Mark Lopez went to St. Anne’s catholic school, and Mater Dei high school. Pop Warner football, Southeast Little League; and junior league basketball at the old YMCA were part of his childhood experience. He served his country for over 25 years in the US Army and US Coast Guard. He is now committed to serving Santa Ana.

Lopez is running to inspire residents to be engaged in civic action. Unity of effort is one of the main ideas he wants to promote. He promises that if elected he will put the residents of Santa Ana first and foremost and not be passive in decision making due to concerns of re-election, or political career image.

Task and Benchmarks to undertake: