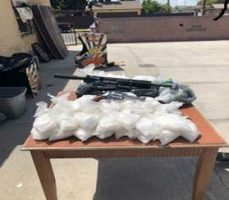 The investigation, which initiated in Orange County, resulted in the seizure of 68 pounds of methamphetamine, 26 pounds of fentanyl, 88 pounds of heroin and about 2 pounds of cocaine from multiple locations in Los Angeles and San Bernardino counties.

Investigators uncovered the estimated $1.6 million worth of illegal drugs in various vehicles and residences, along with a total of five handguns and rifles. While investigators believe most of the narcotics were slated for distribution among the three counties, 18 pounds of methamphetamine was seized while in transit to northern California.

Several enforcement actions led to the narcotics seizures and the identification of multiple subjects, including a New Jersey resident and a Mexican National from Sinaloa, Mexico.

“While the amount of drugs we see on the street every day varies from small amounts to seizures of this magnitude and larger, the impact of drugs on our society continually increases,” said Orange County Sheriff Sandra Hutchens. “It’s important that our Orange County community knows of the daily battles waged against drugs, while fighting a war on major, transnational drug-trafficking cartels. We will continue to hold criminals accountable and remove drugs from our community in spite of the rapid decriminalization of drug crimes.”

« The SAPD is conducting a DUI and Driver’s Licence Checkpoint this Saturday at 1500 E. McFadden St.
Take a course on starting a food business in Santa Ana starting on Aug. 1 »