The Santa Ana Police Foundation is hosting FREE Active Shooter Response for Business Class on April 4, at 10 am. Seats are limited and registration is required.  Click here to register online.

This is a basic exposure to Active Shooter Response training for businesses. Seats are limited. It will close at 30-people. Please be early to sign-in. END_OF_DOCUMENT_TOKEN_TO_BE_REPLACED

Can you believe it?  On Monday, April 1, 2013, Downtown Santa Ana’s “The Crosby” turns 5 years old!  The owners of The Crosby are opening on Monday night at 5 pm for dinner and to celebrate their fifth anniversary.

Several DJs who have either played as guests at The Crosby in the past or who currently have residencies will play a quick set in honor of The Crosby still being here. DJ rotation begins at 8pm and will go until 2am. END_OF_DOCUMENT_TOKEN_TO_BE_REPLACED Santa Ana Council Member Roman Reyna’s official city bio says he is an “Orange County Case Manager at the Orange County Department of Education.”  We questioned that hire as Reyna has a high school diploma – not a college degree.

We contacted several Trustees of the O.C. Department of Education and one of them sent us this answer: END_OF_DOCUMENT_TOKEN_TO_BE_REPLACED

Santa Ana’s Geisha House restaurant is out of business.  Workers are currently remodeling the site for a new restaurant that is moving in – Chipotle Mexican Grill.

Geisha House was busy when they first opened their doors but once they were sold, to a Korean family, the restaurant went downhill fast. END_OF_DOCUMENT_TOKEN_TO_BE_REPLACED

A fire broke out Friday night at a vacant hotel in Santa Ana, the same hotel that has been burned in two other fires in as many years, firefighters said. The three-alarm fire happened at the Saddleback Inn at 1655 East First Street at 10:35 p.m, according to NBC. END_OF_DOCUMENT_TOKEN_TO_BE_REPLACED

Easter weekend is here!  And there is lots to do in and around Santa Ana: 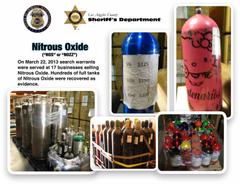 Nearly 300 federal Food and Drug Administration agents and Los Angeles County Sheriff’s deputies served 17 federal search warrants on March 22, 2013 related to the sales of Nitrous Oxide as a drug. This is an update on the results of those search warrants. END_OF_DOCUMENT_TOKEN_TO_BE_REPLACED At the time of the crimes, Serrano worked as a boxing coach at Santa Ana Boxing Club. Serrano met both of his victims through the boxing club. END_OF_DOCUMENT_TOKEN_TO_BE_REPLACED SANTA ANA – A drunken driver was convicted today of killing a 2-year-old boy by crashing into the toddler and his mother and baby sister as they crossed the street. Angel Alberto Cruz Perez, 24, Santa Ana, was found guilty by a jury of one felony count each of vehicular manslaughter with gross negligence while intoxicated, driving under the influence causing bodily injury, hit and run with permanent injury or death, and one misdemeanor count of driving a motor vehicle without a license, with sentencing enhancement allegations for causing great bodily injury to a child under 5 years old, fleeing the scene, and an additional injured person. He faces a maximum sentence of 16 years in state prison at his sentencing, May 3, 2013, at 9:00 a.m. in Department C-30, Central Justice Center, Santa Ana. END_OF_DOCUMENT_TOKEN_TO_BE_REPLACED *Co-defendant prostitute is charged with recruiting and trafficking the victim

WESTMINSTER – A pimp accused of forcing a 14-year-old girl into prostitution will be arraigned tomorrow as the first defendant to be charged in Orange County with forcible human trafficking of a minor under Proposition 35 (Prop 35). Chuncey Tarae Garcia, 33, is charged with one felony count each of human trafficking of a minor by force or fear, pimping a minor, and forcible rape, with sentencing enhancement allegations for forcible rape of a minor 14 years of age and prior prison convictions for possession for sale of cocaine in 2007 and transportation of cocaine in 2009. If convicted, Garcia faces a maximum sentence of 28 years to life in state prison. He is being held on $1 million bail. END_OF_DOCUMENT_TOKEN_TO_BE_REPLACED