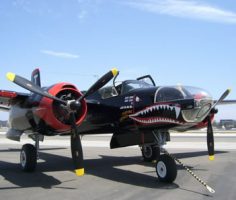 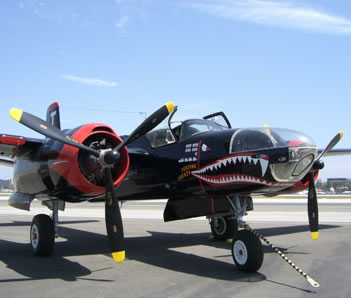 Mark your calendars to experience the sheer power and majesty of the A-26 attack bomber — the fastest aircraft in the Lyon Museum collection. With peak speeds of 355 MPH and a service ceiling of 22,000 feet, no Museum aircraft is more impressive.

The A-26 is scheduled to take flight on Saturday, February 12 at noon.

Guests can experience the rare take off and landing of this impressive aircraft from the ideal standpoint of Lyon Air Museum.

The plane was originally crafted as a single-pilot aircraft, which was highly unusual for an attack bomber of the 1940s.

According to Lyon Air Museum President Mark Foster, “While we can’t document it, we believe this plane was owned and flown by Howard Hughes, which makes it even more distinctive and unique.”

The Douglas XA-26 prototype first took flight on July 10, 1942 from Mines Field, El Segundo, Calif. It initially saw action within the Fifth Air Force in the Southwest Pacific theater on June 23, 1944, when the squadron bombed Japanese-held islands near Manokwari. The bomber served for almost three decades, in World War II, Korea and Viet Nam as well as supporting the seaborne Bay of Pigs Invasion of Cuba in 1961.

The impressive aircraft was acquired by General William Lyon for his private collection in 1999.

The Lyon Air Museum is located at 19300 Ike Jones Road, in Santa Ana.

« Another day in the life of Santa Ana Mayor Miguel Pulido
Meet the members of the Santa Ana Police Foundation, on Feb. 10 at Bistro 400 »