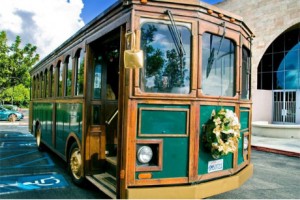 The Downtown Trolley will be running from 8pm to 11pm this Saturday, August 20th during Posse on Broadway and the neighboring Santiago Arts District Art Walk.

What is Posse on Broadway?  Glad you asked!  What happens every third Saturday of the summer? “Posse on Broadway” From the east end to the west end of Downtown Santa Ana eleven venues focus on presenting you with diverse sounds, food, and live entertainment.

The Downtown Trolley stops will be located at:

Galleries & studios will also be open in the Downtown Artists Village !