On Wednesday, February 3rd, 2021 at 9:04 P.M., the Santa Ana Police Department received a call of a male down in the roadway at W. First Street and the Santa Ana Riverbed.

SAPD police officers responded to the area and found an adult male down in the roadway suffering major injuries. Orange County Fire Authority (OCFA) personnel responded and began to treat the male before pronouncing him deceased at the scene.

The preliminary investigation has revealed the male pedestrian was crossing First Street from north to south when he was struck by the vehicle which was headed west. The motorist who was operating the vehicle was contacted at the scene and is cooperating with the investigation.  Alcohol is not believed to be involved in this collision. The cause of the collision remains under investigation.

An unidentified pedestrian was struck by a car and killed early on Thursday morning on the northbound 55 Freeway in Costa Mesa near the 405 Freeway at 3:20 a.m., according to the CHP.

The vehicle that struck the pedestrian was a white Ford Fusion, according to the CHP. The crash happened on the freeway’s right shoulder.

The driver in question was not identified.

The SAPD is reporting a fatal auto vs pedestrian accident and as a result S. Main Street is closed from E.Dyer Road to E. Garry Avenue in both directions until further notice.

#SAPDTraffic please keep away from this area. #TrafficAlert

Upon arrival, officers found all vehicles involved in the collision were in the middle of the intersection. The adult female was lying on the northwest corner of 15th and Main Street suffering from severe injuries. Orange County Fire Authority (OCFA) personnel responded and treated all parties involved for their injuries. The adult female was transported to OC Global to be treated for her injuries. She suffered upper body trauma to her chest and head. She later succumb to to her injuries. The other parties involved in the collision declined the need for further medical attention. END_OF_DOCUMENT_TOKEN_TO_BE_REPLACED 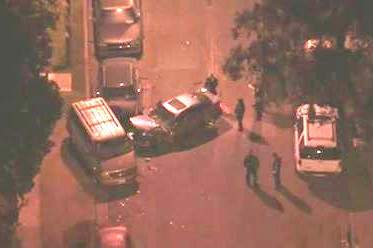 The victim died at a hospital as a result of the injuries that occurred when he was hit by a vehicle. END_OF_DOCUMENT_TOKEN_TO_BE_REPLACED

An unidentified man has been hospitalized after he was hit by two cars while crossing a Santa Ana street Thursday, June 28, according to the O.C. Register.

The victim was crossing she street at the 1300 block of West First St., just west of S. Bristol Street, at around 9:30 p.m. on Thursday night when he was hit by one car and then by another car. Both drivers sped off and did not check on the man or call the police, according to the SAPD. END_OF_DOCUMENT_TOKEN_TO_BE_REPLACED

The responding police officers located an adult male subject on the sidewalk under the 5 Freeway overpass. He was found to be deceased. The police officers then located a dark blue BMW that was stopped along the curb at Newport and the southbound 5 Freeway exit. The driver of that vehicle spoke with the police officers and he was subsequently transported to a local area hospital for treatment of unknown injuries. END_OF_DOCUMENT_TOKEN_TO_BE_REPLACED

An unidentified male pedestrian was hospitalized with life-threatening injuries Saturday night after being struck by a car in Santa Ana earlier yesterday afternoon, according to the O.C. Register.

The man was struck by a southbound vehicle as he was crossing the street at the intersection of Fairview and First Streets, in Santa Ana, according to the SAPD. END_OF_DOCUMENT_TOKEN_TO_BE_REPLACED 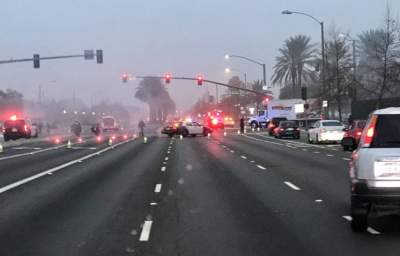 The SAPD advised that the intersection is currently closed in all directions and residents should use alternative routes. END_OF_DOCUMENT_TOKEN_TO_BE_REPLACED

On 10/13/2017 at 0103 hours, officers were dispatched to the area of 1500 E. 17th Street for a report of a vehicle vs. pedestrian collision. Officers arrived and the found a female Hispanic, approximately 50 years of age lying in the eastbound #3 lane of 17th Street just before Concord Street. END_OF_DOCUMENT_TOKEN_TO_BE_REPLACED

The victim was walking on the sidewalk at the 500 block of North Main St. when two cars collided, at about 8:50 p.m. One of the vehicles injured the victim when it went onto the sidewalk, after the collision.  END_OF_DOCUMENT_TOKEN_TO_BE_REPLACED