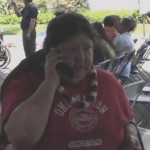 Moreno filed a false police report with the SAPD claiming that Naui attacked a pastor at the Santa Ana Independence Day event that Moreno and her Minutemen friends took over.  Naui tells me that is a total lie and that he would be willing to go get a statement from the minister in question.

Here is the real question – what sort of minister hangs out with Minutemen?  Why does Lupe go all the way to Newport Beach to attend Liberty Baptist Church?  Does this church condone hatred of immigrants?  Click here to email the Pastor at Liberty Baptist.

Would Jesus have hated immigrants?  Did he not admonish us to look after the needy?  Shame on Moreno and Liberty Baptist for embracing an agenda worthy of Lucifer himself!

As most of you know I have put an American Independence Day Event for the last 3 years in the city of Santa Ana with the help of most of you. We worked very hard and it was a great event. About 45 minutes before the event was over Naui showed up looking for me.

He did not find me right away and started problems with people attending. One of his videos even shows him filming while looking for me. He has spent the last 5 years hunting me down and shoving his camera in my face. He has made my grand children cry.

He verbally attacked someone at the event and he reacted and was filmed by Naui. It is on Utube now.

Naui also went after two pastors, but they spoke to him about Jesus Christ loving him and he left them alone. I had to call the police and they came out. By that time, Naui who is a coward took off.

I am asking to please read the article and send letters to the Santa Ana City Council and to the paper. There is a place on the Internet newspaper to leave comments on the most commented section. Please do not say anything that would cause more problems, counter Naui’s nasty comments.

Please, please pray for our cities and nation!!!

Thank you and blessings to all,