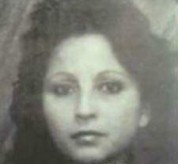 Santa Ana resident Kristyne Olivia Trejo disappeared twenty eight years ago, on June 27, 1988. Her son,  Andrew Trejo was about to graduate from fifth grade at the time. But he never saw his mom again.

Trejo had planned to attend a drug addiction recovery meeting the morning that she was last seen.  She had been a waitress prior to her disappearance.

Trejo’s family did everything they could to find her. They filed a missing persons report. They hired private investigators. And they even appeared on an episode of “Unsolved Mysteries.” But they could not find any trace of Trejo.

Last week Andrew Trejo finally found out what happened to his mom.

Law enforcement agencies had matched DNA from Trejo’s relatives with a skull and arm bone found in November 1989 in the remote desert area of Pinon Hills in San Bernardino County, according to the O.C. Register.

While no one knows yet how Trejo ended up in the desert or what might have killed her, her family at last has some closure as they know her ultimate fate.

Andrew was 10 when he last saw his mom. He is now 37 and he works as an Orange County gravedigger. Ironically the Trejo family is having trouble coming up with the money to give Trejo a proper burial.

The Trejo family has set up a GoFundMe page to help pay for the funeral costs. So far they have raised $1,785.