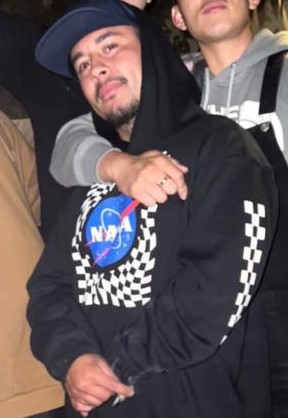 George Arizon, 27, a Corona man, was arrested on Wednesday, Dec 21, on charges of using a gun to threaten employees and demand cash from at least 10 different businesses across central Orange County last month, according to police investigators.

Arizon walked into five different stores in Santa Ana on Nov. 1, while armed with a black handgun with a gold barrel according to court documents.

In each robbery Arizon either pointed his gun at a store employee or placed it on the store’s counter then he would demand that they give him all their cash without “making a scene.”

Arizon struck again on Nov. 8 when he allegedly walked into two stores in Garden Grove and three in Westminster with the same gun, and again demanded all of their cash.

A Westminster police officer arrived at the strip mall where Arizon was accused of targeting businesses, after the crime at the fifth store, and spotted the suspect running from the parking lot.

The police officer chased him into a neighborhood, where police set up a perimeter but they were not able to find Arizon. They got luck however as security video camera footage from a nearby motel showed Arizon as he ditched the hooded sweatshirt he was wearing, then continued to flee from the area.

The police were able to use cell phone location data, the security camera footage, and the hooded sweatshirt to identify and track down Arizon.

The police found Arizon’s Facebook account, and his profile photo showed him wearing the same hooded sweatshirt, which has a NASA logo on the front side.

Arizon is accused of stealing at least $2,480 in cash and two packs of cigarettes during these robberies according to an affidavit written by an SAPD police detective working with a federal task force focused on violent crime in Orange County.

A second man, identified as Brandon Robinson of Anaheim, is also accused of assisting Arizon in the robberies by acting as his getaway driver. Robinson was also arrested on Wednesday according to the U.S. Attorney’s Office.

Police and federal investigators were able to track Arizon as he met with Robinson in Cerritos, and as they ate together at a restaurant in Buena Park.

Agents entered that restaurant as well and observed Arizon wearing boots that matched the ones the robbery suspect wore during the string of crimes.

Arizon has not been formally charged yet, but he is supposed to appear at an Orange County federal court on Thursday.