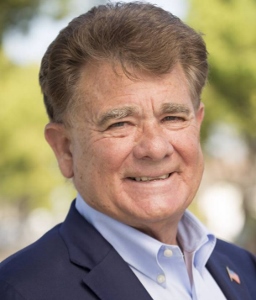 Santa Ana, Calif. (January 11, 2022) – Vice Chairman Doug Chaffee, Fourth District, has been chosen unanimously by his Board colleagues to serve as Chairman of the Orange County Board of Supervisors for 2022. Supervisor Donald P. Wagner, Third District, will serve as the Board’s Vice Chairman.

Elected as Fourth District Supervisor in 2018, Chairman Chaffee represents the communities which includes the cities of Anaheim (portion of), Brea, Buena Park, Fullerton, La Habra, Placentia and Stanton. Prior to serving on the Board of Supervisors, Supervisor Chaffee was elected to the Fullerton City Council in 2012 and was re-elected in 2014. He twice served as Mayor of Fullerton in 2014 and 2018.

“I look forward to working in partnership with Vice Chairman Wagner and our colleagues on the Board of Supervisors. Our first mission is to win our battle against the COVID-19 virus and achieve economic recovery for the benefit of our Orange County residents.”

Chairman Chaffee is a longtime Fullerton resident, graduating from Fullerton Union High School. He earned a B. A . in Economics from the University of Redlands and a JD from the Northwestern University School of Law. He is married to his wife, Paulette, who serves as Ambassador of the Orange County Fourth District. They have two sons and two grandsons.

Supervisor Don Wagner was chosen by his fellow board colleagues to be Vice Chairman this year. He represents the residents of the Third District – which includes the cities of Anaheim (portions of), Irvine (portions of), Lake Forest, Mission Viejo, Orange (portions of), Rancho Santa Margarita, Tustin (portions of), Villa Park, Yorba Linda and unincorporated areas.

“It’s an honor to serve as the Vice Chairman of the Board of Supervisors, representing over 630,000 diverse Orange County residents,” said Vice Chairman Don Wagner. “I look forward to serving with Chairman Chaffee and my colleagues to ensure Orange County is a safe and vibrant place to live.”