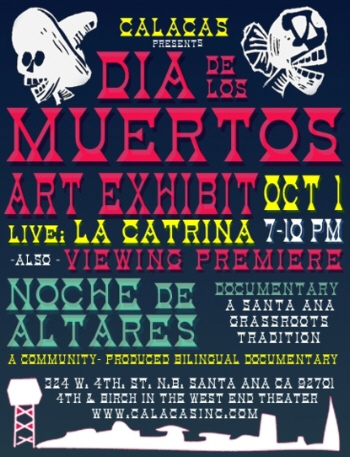 Calacas is also screening the premier of “Noche de Altares: A Grassroots Festival,” a new documentary about this grassroots Santa Ana tradition.  This is a community produced bilingual documentary.

Noche de Altares will be shown continuously throughout the art event, from 7 to 10 p.m. DVDs will also be made available starting Saturday for $5 at the store to help raise funds for this year’s event, organized by El Centro Cultural de México and Calacas. It will take place on Nov. 5th on the corner of Fourth and Birch in Santa Ana., according to the OC Weekly.