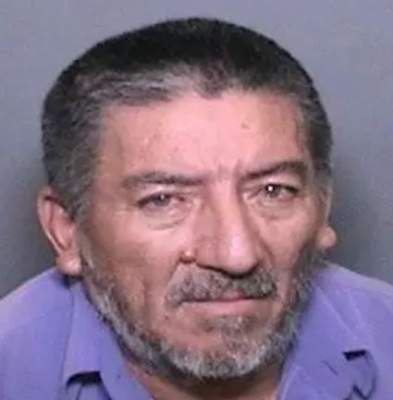 Juan Palacios shot and killed a coworker at a Tustin apartment complex over 15 years ago for the paltry sum of $60. He fled from the U.S. but the law finally caught up to him as he was convicted on Wednesday on felony murder charges.

Palacios is now 63 years old. He was found guilty of a second-degree murder charge with a sentencing enhancement for the personal discharge of a firearm in connection with the murder.

Palacios killed his coworkers, Mario Cano Santamaria, who was then 32-years-old, in 2004. The fatal confrontation started earlier that day at Salon Guadalajara in Santa Ana, where they both worked as security guards. (Why a salon needed two security guards is unknown).

The owner of the salon gave Palacios $60 but he felt he was being short-changed for the work he had done. Santamaria got involved in the argument by asking Palacios to give him the $60 in order to pay back a loan. Palacios then crumpled up the cash and threw it, and Santamaria picked it up and kept it. The argument at the salon ended and both man left.

Santamaria headed for his Tustin apartment, where he lived with his wife and three children. He allegedly told his wife that he had gotten into a fight with a co-worker over money.

A few minutes later the sound of a gunshot reverberated through the complex. Santamaria’s wife found him bleeding in the courtyard of an adjacent apartment complex.

Palacios fled the scene with the same driver who had brought him to the apartment. He told that driver “if you say anything I’ll kill you,” according to the prosecutors. Palacios also previously threatened to kill Santamaria over money he felt was owed to him.

The prosecutors told the Orange County Superior Court jury that Palacios basically went to Santamaria’s home, hunted him down and murdered him.

Tania Rebecca Vallejo, Palacio’s public defense attorney, said that Santamaria was the aggressor in the fatal confrontation. She alleged that Santamaria hit Palacios with a gun and then the two men fought before the gun went off, striking Santamaria. Vallejo told the jurors that Palacios was afraid and he defended himself.

Palacios ended up making his way to the Mexican border after the killing after his brother gave him a ride. He told his brother that he was having problems with his wife.

The FBI finally tracked Palacios down in his native country of El Salvador many years later. Palacios was arrested in 2016 and he was then extradited to the United States to face a murder charge in 2018.

The jury deliberated for less than a day before finding Palacios guilty.