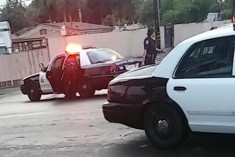 In case you were wondering why the SAPD closed the eastbound lanes of West McFadden Ave., from South Fairview to South Sullivan Streets, late this afternoon, it was because of yet another gang-related shooting.

SAPD police officers were called to the 2600 block of West McFadden Ave., just west of Jerome Park, at 4:35 p.m., where they came across a man who had a gunshot wound in his upper body, according to the O.C. Register.

The victim ended up at a local hospital where he was said to be alert and in serious but stable condition.

Yet another possibly gang-related shooting took place later in the evening, at 7:33 p.m., at the 1900 block of West Myrtle Street, a mile from the earlier shooting, just north of Monte Vista Elementary School. SAPD police officers who responded to the call found a man with a gunshot wound to his upper body. That victim also was taken to a local hospital where he was recovering form injuries described as non-life-threatening.

As is usually the case in these shootings, no description of the suspects in either of the two incidents was made available. And no weapons were found at the scenes.  The SAPD has no idea what might have led to the attacks or if the victims knew their shooters.

To top it all of the police indicated that the witnesses were semi-(cooperative) to uncooperative.

« The O.C. Coroner is trying to identify a body found in the ocean off Huntington Beach on 12/31
Earthquake in Banning felt in Santa Ana this morning »