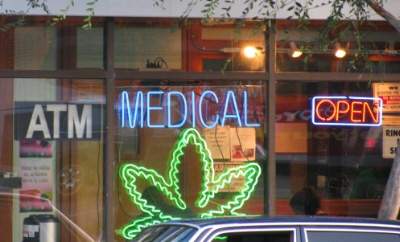 SANTA ANA, California – A dozen people associated with a chain of nine marijuana stores that operated across Orange and Los Angeles counties were arrested this morning on federal drug trafficking charges. The 12 arrested are among 14 people named in a 14-count indictment returned last week by a federal grand jury.

The indictment outlines a narcotics-trafficking conspiracy led by John Melvin Walker, who owned and operated nine marijuana stores in cities across the two counties. The conspiracy count alleges that the 14 defendants participated in a scheme that distributed, at the very least, a ton of marijuana through the storefronts.

The nine marijuana stores allegedly operated by Walker were Alternative Herbal Health in Long Beach, Safe Harbor Collective in Dana Point, Garden Grove Alternative Care in Garden Grove, Santa Ana Superior Care in Santa Ana, Belmont Shore Natural Care in Long Beach, Santa Fe Compassionate Health Care in Santa Fe Springs, Costa Mesa Patients Association in Costa Mesa, the Whittier Collective in Whittier, and APCC (also known as the “San Juan Capistrano Store”) in San Juan Capistrano. Most of the stores previously were the subject of search warrants executed in 2010 and 2011. Most of the nine stores are now closed, but several are believed to still be in operation, including Belmont Shore Natural Care.

The investigation in this case revealed that the nine marijuana stores generated tens of millions of dollars in income, with the indictment alleging that in 2009 alone Safe Harbor Collective had profits of approximately $2.4 million.

The indictment alleges that Walker failed to report any income generated at the marijuana stores to federal tax authorities and that he instructed his bookkeeper “to destroy all records pertaining to income generated at the marijuana [stores] shortly after they were generated and not to create records that fully identified Walker’s connection to the marijuana [stores].” One of the managers of Belmont Shore Natural Care communicated to Walker that “they should shred documents related to cash intake at Belmont Shore Natural Care at the end of the night,” according to the indictment.

The charges in the indictment include conspiracy (to distribute marijuana and to maintain drug-involved premises) and maintaining drug-involved premises near schools. Additionally, Walker is charged with being a felon in possession of firearms (including a handgun, a 12-gauge shotgun, and an AK-47) after previously being convicted in state court on cocaine and marijuana charges. When authorities seized the weapons from Walker’s home last year, they also seized approximately $390,000 in cash.

Furthermore, Walker and his security manager are charged with possessing firearms in furtherance of drug trafficking, a crime that carries a mandatory five-year sentence to run consecutively to any other sentence given to the defendants.

The defendants named in the indictment are:

The 12 defendants arrested this morning are expected to be arraigned on the indictment this afternoon in United States District Court in Santa Ana.

All 14 defendants charged in the indictment are named in count one – the conspiracy charge – which carries a mandatory minimum sentence of 10 years in federal prison and a maximum statutory sentence of life without parole.

« How Mayoral candidate Benavides ended up honoring the Minutemen
Bring the kids to the Westfield MainPlace Mall for trick or treating! »