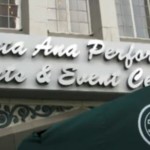 « Forum about helping our communities succeed set for Nov. 17, at the Delhi Center
Poncho Sanchez headlines concert to benefit SAUSD schools, on Nov. 14 »