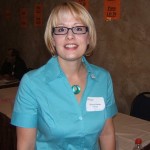 Republican Kyrsten Bromiski is not one of my fans!

Well, that didn’t take long.  I received a nasty Facebook message today from a lady named Kyrsten Bromiski.  Here is some of what she had to say (I had to redact the worst of it – it was quite nasty):

Really running for school dist? Are you kidding..you are a complete racist! You through so much hate and are disguisting. I hope to fund some part of IE against you again… You’re an idiot!

I never heard of this lady so I looked at her Facebook profile.  She lives in Orange and is a Republican.  Apparently spelling and grammar are not her strong suits.  Her friends include:

Inexplicably, Bromiski is also friends with Santa Ana Mayoral candidate Alfredo Amezcua and Jessica Amezcua.  She claims that she is just spying on Amezcua.  If so I recommend that he defriend her.

Why does Bromiski say I am a racist?  Because I object to Republican attacks on migrants – and I strenuously oppose the Minutemen and other such hate groups.  And that makes me a racist?  Unbelievable.  No wonder the GOP cannot tread water in Santa Ana.

I was also attacked last week on another blog by a Democratic blogger who admitted that he doesn’t even live in the SAUSD.  His claims were largely libelous and he did not speak to the issues.  He just went on the attack.  He is one of the local bloggers who supported Councilman David Benavides’ attempts to honor the Minutemen who were involved in the Santa Ana 4th of July debacle.

I also took a look today at the OC Voter Registrar’s website and found that there are still no other challengers running for the SAUSD School Board.  The deadline for challengers to file is August 6.

SAUSD incumbent John Palacio told me last week that Alfredo Amezcua’s daughter, Valerie, is not going to run.  She ran in 2008 but lost, barely, to Roman Reyna.  Palacio is one of Amezcua’s most faithful supporters.  As such I wonder if Amezcua’s daughter opted not to run so that Palacio’s seat won’t be at risk?

One of my main issues as a candidate is term limits for SAUSD School Board members.  They should not be able to serve more than two consecutive terms.  When you consider the disaster that is the SAUSD, it is obvious that we need more turnover on our School Board.  We cannot allow the same faces to keep getting elected – as they are not giving us the results we want.

I did hear rumors that at least two Vietnamese candidates are considering running.  I would welcome that.  Our Viet community is growing.  They are becoming a very important part of our community and it would accordingly be great to see one or more of them run for the School Board.

UPDATE: I just received another delightful note from Bromiski.  She is most upset that we publicized her original hateful, misspelled diatribe.  Perhaps she will refrain in the future from attacking candidates she doesn’t know, via a public website like Facebook…

« Loretta Sanchez for Governor in 2014?
Benavides goes after Mayor Pro Tem Alvarez while defending Moreno and the Minutemen again »