Minutemen protesting at the Mexican Consulate in Santa Ana on Wednesday 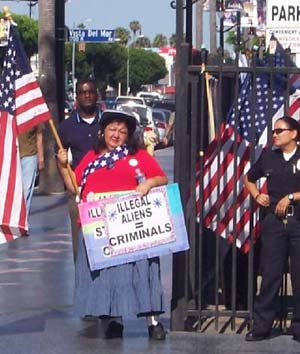 The Minutemen are in an uproar because the City of Santa Ana decided to hold this year’s Fiestas Patrias event on September 11.  They are protesting tomorrow, March 31, at the Mexican Consulate in Santa Ana , from 7am to 9am.  The Consulate is located at 828 North Broadway, in downtown Santa Ana.

Counter-protesters will be there as well.

Normally the Fiestas Patrias event is held around the middle of September, but in order to hold the event on a weekend, the City of Santa Ana opted to start the event on Sep. 11, which of course coincides with the terrorist attack our nation suffered when members of Al-Qaeda destroyed the Trade Towers in New York.  Over 300 Mexican nationals died in that event.  The Minutemen either don’t know that or they don’t care.

The Minutemen are led locally by Republican Lupe Moreno, who resides in Santa Ana.  She blames immigrants for the murder of her sister’s son, in Arizona.  Lupe also married an immigrant from Mexico and apparently the marriage didn’t work out.  They are now divorced.

It is unfortunate that the City of Santa Ana goofed by choosing Sep. 11 to hold the Fiestas Patrias event, but the Mexican Consulate is not to blame.  The decision was made by Santa Ana City Manager Dave Ream and his staff.