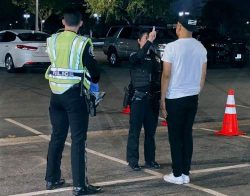 This past weekend, the Westminster Police Department held a DUI checkpoint to enforce traffic laws and to educate drivers on the dangers of impaired driving.

The Westminster Police Department reminds you that driving a vehicle while impaired is a dangerous crime. Being a responsible driver is simple: if you are drinking, DO NOT DRIVE.

Remember, if you see something, say something! Your actions could help save someone’s life.

« A vacant building in North Santa Ana burned down last night
The Santa Ana poem of the week is “Tears of Osiris” by J. Martin Strangeweather »