The passage of Senator Correa’s Senate Concurrent Resolution 77 (SCR 77) declared the last full week of September as Childhood Obesity Prevention and Fitness week in California. This event is the first in a weeklong series of events that promote physical fitness and healthy eating throughout the community. The event will consist of health exams and screenings, fitness activities and health education, local and state resource information, performances, free healthy food, prizes and more. Senator Correa has been working with students, parents, and the local community in this ongoing effort in Orange County. 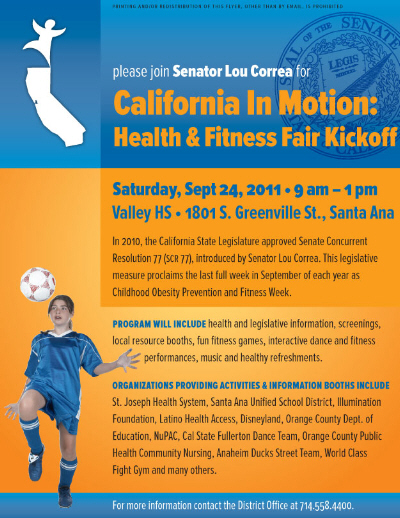 What: California in Motion

« O.C.D.A.: Ramos and Cicinelli arraignment update
Join the 2011 O.C. Rideshare and you could win an Applie iPad! »

2 thoughts on “Correa to host a Health and Fitness Fair on Saturday, at Valley High School”