A driver who ran a red light Monday morning slammed into a school bus headed to Edison Elementary School, police said. The eight children on the bus were not injured, according to the Orange County Register.

A school bus driver was driving eastbound on West Wilshire Avenue, shortly before 7:45 a.m., with eight kids between the ages of 7 and 9 on board when they drove through the intersection of South Bristol Street, according to the SAPD.

As the bus headed through the intersection, a 43-year-old man driving a Buick Century was driving on South Bristol Street. The suspect did not stop at the red light and crashes into the school bus. 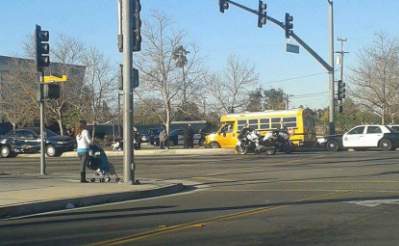 The male suspect  then smashed into a red Dodge being driven by a 23-year-old woman according to the CHP.

No one involved in the accident was injured.

Traffic was a mess after the accident. The Register reported that traffic lanes were not immediately closed.

The CHP investigates accidents involving school buses. The CHP couldn’t cite the driver who ran the red light due to jurisdictionall issues. He may face SAPD charges for causing the accident.

The suspect is not though to have been drunk and he said he wasn’t on his cell phone.

The driver said thst he didn’t realize the light was red.