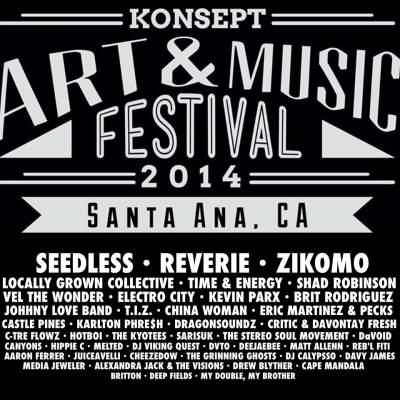 Art, Music, Fashion, Photography, Culture all colliding for another day in the Historic Downtown Santa Ana, The last few years we’ve been putting together shows in this wonderful city to help push the arts. This year Konsept decided to do it even bigger, thanks to our sponsors we were able to put together 12 hours and 6 stages worth of music for you guys.

The team decided to do something different to give back to our community, so we teamed up with Locally Grown Collective to help a non profit by the name of Waste Not OC, an organization that works with low income families and homeless people start a new culinary program for troubled teens on probation. So with that said we’ve decided to donate all of the profits to this organization.

I know the event is free so your probably thinking to yourself, how are we going to raise money? We will have merch for the festival donated to us to sell during the festival, so the more you buy the more money we raise! Come out on Sept 6th from 2pm-2am to this free event happening all across DTSA.

SlapStation Stage – brought to you by Bootleggers Beer and Power 106

The Grind-Haus – Brought to you by Noise Revolt

The Feels After Party – Brought to you by The Feels

Thank you to our Sponsors: