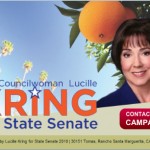 « Yamagata-Noji blows off the O.C. Register’s candidate questionnaire
Why is KOCE shutting Iglesias out of the Tran vs. Sanchez debate on Oct. 13? »

3 thoughts on “Who is Lucille Kring?”