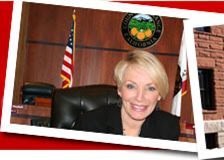 (Santa Ana, CA) — The County of Orange has been notified by two current department heads of their plans to retire in the coming months. Clerk of the Board Darlene J. Bloom notified the Board of Supervisors that her retirement will be effective December 30, 2011, while Health Care Agency Director David L. Riley will retire in January 2012. “We appreciate the many years of dedicated service to the County provided by Darlene and Dave and know they will be missed by all of those in the County family and many in our community,” said Thomas G. Mauk, County Executive Officer. “Their expertise and enthusiasm for public service will be difficult to replace.”

Dave Riley began his career with the County of Orange in 1976 and held positions with several County departments before joining the Health Care Agency (HCA) in 1983. He was selected to serve as HCA’s Chief Financial Officer in 1995, became the Agency’s Assistant Director in 2003 and was promoted to Director in 2009. Dave is a graduate of California State University, Fullerton and received the university’s Distinguished Alumni Award in 2011.