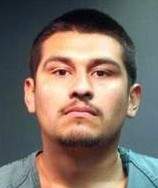 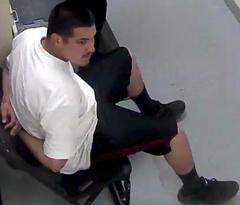 On 5/18/2017 Robbery Detectives release information to the media about two separate robberies that occurred in the City of Santa Ana on 5/17/2017. The first robbery occurred at the Motel 6 located at 1623 E. 1st Street, where the suspects jumped lobby desk brandishing a knife at the hotel clerk demanding the money in the cash register. The second robbery occurred approximately five minutes later at the 76 Gas Station located at 1502 E. Edinger. The second robbery was captured on video and released to the media.

On 5/19/2017, SAPD Robbery Detectives were advised that a member of the Irvine Police Department Jail staff had watched a news story on robberies and recognized one of the suspects in the video as a Michael Anthony Campoy (21) Downey. He recognized Campoy as someone the Irvine Police Department had arrested and booked the same nig ht as the Santa Ana robberies. Campoy was arrested in Irvine for Driving Under the Influence which involved a single car traffic collision into a pole. The Irvine jailer advised Campoy was wearing the same clothes seen in the news story. Irvine Police informed our detectives that the vehicle Campoy was driving during his traffic collision was the same make and model seen in the news story. Additionally, they informed detectives the vehicle was impounded at one of their tow facilities. Our detectives were able to obtain a search warrant for the vehicle. During their search of the vehicle detectives located the knife used during the Motel 6 robbery.

On May 23, 2017, detectives responded and made contact with suspect Michael Anthony Campoy at his residence in Downey. During their interview with Campoy, detectives learned the identity of the second suspect. That suspect was a 17 year-old male who lived on the same street as suspect Campoy. Detectives placed both sus pect under arrest for the two Santa Ana robberies. Campoy was booked into the Santa Ana PD jail for Robbery and the 17 year old suspect was lodged into Juvenile Hall on the same charges.

The Santa Ana Police Department commends the Irvine Police Department Jail staffer for his observations and information he provided in this case. Without this assistance, the case would have been far more difficult to solve.

Anyone with information on these suspects, please contact SAPD Robbery Unit/ Det. Cpl. A. Silva at 714-245-8545, email asilva@santa-ana.org or Orange County Crime Stoppers at 1-855-TIP-OCCS.
For full details, view this message on the web.