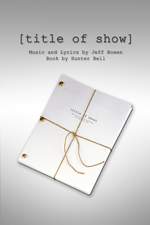 [title of show] has been heralded by the New York Daily News as “Terrific! A kick-ass time!” And Entertainment Weekly called it “sly, sassy, inspired.”

“What I love about [title of show],” commented the show’s director Tito Ortiz, “Is that beneath its hilarious exterior, there is a show about four friends who come together to create a piece of art and end up becoming a family in the process.”

David C. Carnevale, co-founder of Theatre Out, commented, “[title of show] is the perfect show to open our 2013 season. It’s funny and touching and shows the audience a slice of what it takes to create a work of art.”

Tickets for [title of show] range from $20-$25 General admission and $20 for students with valid student ID and can be purchased exclusively at www.theatreout.com or at the Box Office on the night of the performance based on availability. All performances are at The Empire Theatre located at 202 N. Broadway in Santa Ana’s Artist Village. Peformances begin January 11, 2013 through February 23, 2013; Fridays and Saturdays at 8:00 pm with select Thursdays at 8:00pm.

In addition to [title of show], Theatre Out’s 2013 season includes the musical FALSETTOS, SLIPPING* by Daniel Talbott, Tennessee Williams’ epic masterpiece ORPHEUS DESCENDING*, a very SORDID comedy by Del Shores that we can’t quite announce, the hit Broadway musical KISS OF THE SPIDER WOMAN and the return of the audience favorites THE ROCKY HORROR SHOW* and LAST CHRISTMAS I GAVE YOU MY HEART BUT THE VERY NEXT DAY YOU SAID YOU WERE GAY.

*Rights Pending. All productions are subject to change without notice.