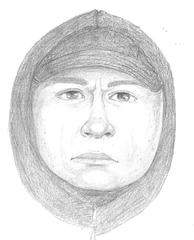 On 12/27/2016, at about 10:46 pm, an adult female was parking her vehicle in the 1600 Block of South Pacific Avenue in Santa Ana, when she was approached by a suspect. The suspect opened the driver’s side vehicle door at which time he entered the vehicle and pulled down his pants, exposing himself to her.

The suspect pushed himself on top of the victim and attempted to sexually assault her. The victim screamed and kicked violently, forcing the suspect off of her and out of the vehicle. The suspect fled on foot west on Occidental Street. The victim and a witness provided the above descriptions to a sketch artist.

The suspect is described as a male, Hispanic, 24 to 30 years old. 5’05” to 5’ 07” tall, with a medium build, a medium to dark complexion and multiple pock marks or acne scars on his face. The suspect was wearing a dark baseball cap, a gray hooded sweatshirt, dark pants and dark shoes with a white soles.

The Santa Ana Police Department is seeking the public’s help in identifying this violent suspect, who seems familiar with Southwest Santa Ana. If you have additional information about this suspect, please contact Detective Gabe Gutierrez at (714) 245-8516 or Orange County Crime Stoppers at 1-855-TIP-OCCS.