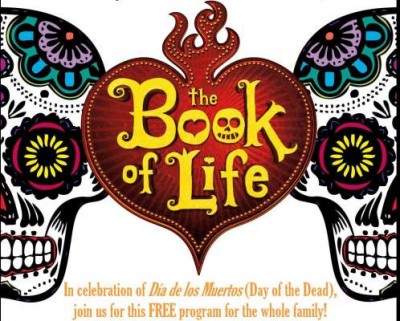 This animated film features the voices of a cast of A-List actors: Diego Luna, Zoe Saldaña, Channing Tatum, Christina Applegate, Kate del Castillo, Danny Trejo, Ice Cube, Ron Perlman, and many more! Rich with a fresh take on pop music favorites, The Book of Life encourages us to celebrate the past while looking forward to the future. The film, rated PG-13, can be enjoyed by the whole family.

Embracing cultural events and celebrations such as Día de los Muertos reminds many of their heritage and reaffirms that Santa Ana is a culturally diverse and beautiful city. Showing such family-friendly films is a great way to encourage family visits to the library for programming and services.

Join the Santa Ana Public Library for this special program which will be held on Wednesday, November 4, 2015 beginning at 6:00 p.m. in Meeting Room A. There will be a special performance just prior to the screening of the film, and light refreshments inspired by Día de los Muertos will be served.

Free metered parking is available after 6 p.m. on Ross Street, or 2-Hour validation is available for the parking structure next to the library on Civic Center Drive.