The OC Coroner is trying to identify a man who died in Orange on Dec. 1 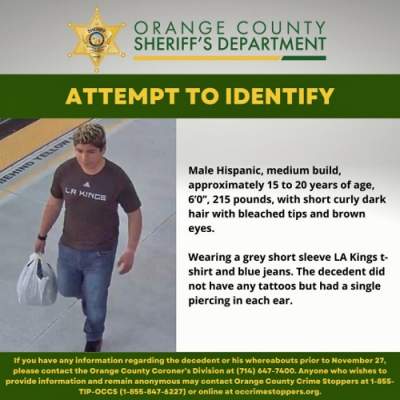 SANTA ANA, Ca. (Dec. 10, 2021): The Orange County Sheriff’s Department Coroner Division is seeking the public’s assistance in identifying and locating next-of-kin for a male who died on December 1, 2021, at St. Joseph’s Hospital. The decedent was transported to the hospital on November 27, 2021, after being discovered unresponsive on the sidewalk near Chapman Ave. and Main St. in the city of Orange.

On November 27, the decedent was last seen on security camera at the Metrolink Station on Chapman Ave. The decedent paid cash for a train ticket to San Bernardino but missed his train. The decedent is described as a male Hispanic, medium build, approximately 15 to 20 years of age, 6’0’’, 215 pounds, with short curly dark hair with bleached tips and brown eyes. He was wearing a grey short sleeve LA Kings t-shirt and blue jeans. The decedent did not have any tattoos but had a single piercing in each ear.

The Orange Police Department and Coroner investigators have been working tirelessly to identify the decedent, including a review of missing persons’ reports from the local area and attempts to utilize existing fingerprint databases, none of which revealed the identity of the decedent.

If you have any information regarding the decedent or his whereabouts prior to November 27, please contact the Orange County Coroner’s Division at (714) 647-7400 reference Coroner’s Case #21-07093-BG. Anyone who wishes to provide information and remain anonymous may contact Orange County Crime Stoppers at 1-855-TIP-OCCS (1-855-847-6227) or online at occrimestoppers.org.

One thought on “The OC Coroner is trying to identify a man who died in Orange on Dec. 1”