A business jet that took off from John Wayne Airport on Monday, Dec. 27, crashed in El Cajon, killing four people. The pilot was heard screaming in air-traffic control audio “Oh sh*t! Oh sh*t! Oh sh*t!” prior to the crash.

Here is a press release from the San Diego County Sheriff regarding the plane crash:

The San Diego County Sheriff’s Department continues to assist our partner law enforcement and fire agencies with a small plane crash in the unincorporated area of El Cajon.

The plane was scheduled to land at Gillespie Field in El Cajon.  At this time, we do not have information on where the plane was coming from or how many were on board. Firefighters were not able to find any survivors at the crash scene. In the County of San Diego, the Medical Examiner’s Office is the agency that rules on the manner or cause of deaths, as well as identification of the person/people once the family has been notified.

One home was damaged and power lines were knocked down in the area. No one was hurt on the ground. At this time, San Diego Gas and Electric (SDG&E) crews are on scene working to restore power to nearly 70 customers in the area. The American Red Cross will be providing assistance tomorrow morning, December 28 to residents who remain affected by the power outage.

Be aware that Pepper Drive will remain closed between Topper Lane and North 2nd Street through Wednesday, December 29 as it will take some time for the Federal Aviation Administration (FAA) and National Transportation Safety Board (NTSB) to process the scene. Please avoid the area if you can and plan accordingly if this is part of your commute.

If you have photos or videos of the plane crash, send them to witness@ntsb.gov.

Our thoughts and prayers go out to everyone affected by the plane crash. If you need to talk to someone or need mental health resources, call the County Crisis Line 24/7 at (888) 724-7240.

After he was arrested, Stringer also admitted to carjacking a baseball coach and 16-year-old boy from the area around Hickman Field in Kearny Mesa around 10 a.m. Wednesday, according to ABC 10 News. END_OF_DOCUMENT_TOKEN_TO_BE_REPLACED

Twelve Living Kidney Donors to Run in 200-Mile Relay Race to Raise Awareness About Healthy Lives After Donation Huntington Beach, Fri., Apr. 10, 6:15am, to San Diego, Sat., Apr. 11, 4:30 pm Twelve living kidney donors will run the 200-mile, overnight Ragnar Relay So Cal from Huntington Beach to San Diego to raise awareness that people can still lead normal, healthy lives after donation and to inspire others to take action in support of living and deceased donation. Over the course of two days and one night, team #344, “Have You Seen My Kidney?” will join 762 other teams in the race. Each participant will run three times, with each leg ranging between three and eight miles, varying in difficulty. Participants: Tyson Wood (Rescue, CA) and Bill Martinez (Lynwood, CA), who donated to their sisters; Kathleen Hostert (Fullerton, CA), who donated to her husband, Kathy Vochoska (Bakersfield, CA),who donated to her son and Leann Slaby Bier (Los Angeles, CA), who donated to her father and lasted 30 of 39 days on the TV show, ”Survivor;” Phillip Palmer (Los Angeles, CA), Michelle Guardino (Loomis, CA), and Fernando Landeros (South El Monte, CA), who donated to friends; Melanie Medlock (Scottsdale, AZ), who donated to an old friend after reconnecting on Facebook; team captain Rick Glover (Santa Ana, CA), who donated to a friend and walked alongside the 2015 Donate Life Rose Parade float; retired sheriff captain Elizabeth Kelly (Folsom, CA), and Ivan Slaban (Escondido, CA), civilian member of the San Diego Police Dept., who donated to strangers. END_OF_DOCUMENT_TOKEN_TO_BE_REPLACED 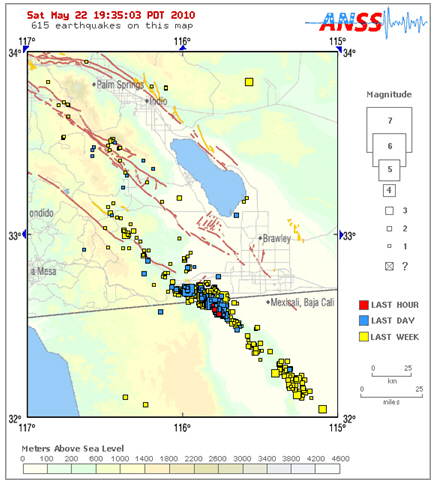 “A series of moderate earthquakes south of the California border on Saturday shook buildings in downtown San Diego but there were no reports of damage or injuries,” according to the AP.