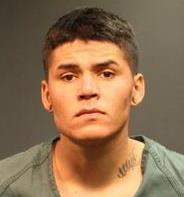 At the time of the crime, Guerrero was friends with 54-year-old Javier Rodriguez Preciado. END_OF_DOCUMENT_TOKEN_TO_BE_REPLACED