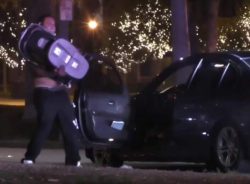 The SAPD were in pursuit of a suspect in a vehicle as it traveled on local freeways and surface streets, at approximately 10:45 p.m. on April 4, 2021, according to OC Hawk.

The driver eventually exited the vehicle with a baby car seat in his hands while fleeing in foot.

About 10 SAPD police officers ran down the suspect and tackled him. He was then taken into custody without further incident.

The incident is under investigation.