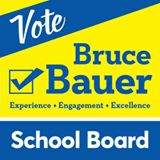 CWA, Local 9510, represents, in part, the hard working substitute teachers in the Santa Ana Unified School District, so it is true that Bruce Bauer has been endorsed by numerous “Santa Ana Teachers.”

“The endorsement of CWA Local 9510 comes on the heels of endorsements of my campaign by (1) SEIU, Local 721 (which includes the hard working individuals employed by the City of Santa Ana); (2) Senator Lou Correa; and (3) Congresswoman Loretta Sanchez, and others, and provides momentum forward for my campaign. I am excited about the most recent endorsement by CWA, Local 9510 and appreciate their vote of confidence in me.” Bruce Bauer, Candidate for Santa Ana Unified School District.

The General Election is November 8th and three seats will be up this year on the School Board.

Editor’s Note – Bauer has also been endorsed by Santa Ana City Council Members Sal Tinajero and Angie Amezcua, who are both public school teachers (although Tinajero announced his retirement this year).